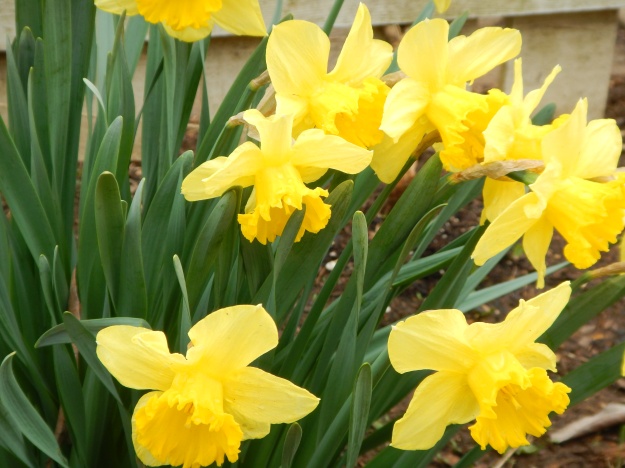 Since January 2017, I have belonged to a Facebook group, March for Science. This group has been focused on organizing Earth Day (April 22) marches in support of science. In my life I have been mostly an English teacher, not a scientist. On my registration form for the march, I checked “science enthusiast.”

For months, March for Science group members have been posting “Why I march” comments. I loved almost all of the comments I have read and sometimes I cried about the stories. I never laughed because the current repeated attacks on scientific truth are deadly serious.

I love—I really do—the scientific method. I have read about, known, and admired many scientists.  I admire many of my mentors in the Rivanna Chapter of Virginia Master Naturalists. In literature,  John Wesley Powell, who scaled canyon walls with one arm, is one of my heroes.  Farley Mowat, who railed against the decimation of human and animal populations in Canada, is another. However, my reasons for marching next Saturday in Washington, DC are, perhaps, more in keeping with my English major sensibility. 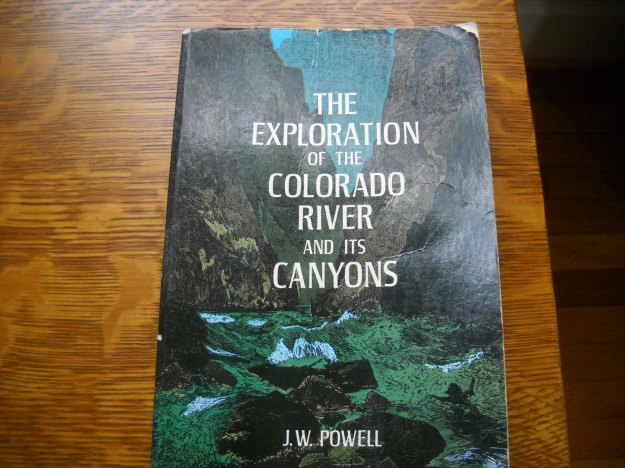 The Exploration of the Colorado River and Its Canyons

Why I Will March for Science on Earth Day

I attended the ENACT (Environmental Action for Survival) Teach-In on the Environment at the University of Michigan in March 1970 (see https://blogs.lib.msu.edu/red-tape/2016/mar/march-11-14-1970-university-michigan-holds-environmental-teach/ for more information about the teach-in). I was a young idealist then and I am old idealist now. I won’t give up.

I march in honor of my mother. I planted my first garden with my mother: popcorn and radishes against the side of the house in Detroit. Counting that garden and the one I grew with my brother George, that’s 45 years of gardens, most of them organic. Food and beauty. I won’t give up gardening now.

I march in honor of my father. My father taught me how to fish, skip stones, rake leaves, and shovel snow. He put up a hammock between two tall oaks, so we could see the sky, the water, and the leaves while we rested and dreamed. I won’t give up the dreaming.

Scenic Lake, Michigan ( my brother’s lake; I don’t have photos of the lake I grew up on)

I march in honor of Michigan and the Great Lakes, my first home. They want to cut EPA research for the Great Lakes by 97%. I want them to hear my “no.”  I remember the crayfish and the sunfish in the sunny shallows of our lake. I remember the power and strength of Superior. I will not let them destroy our lakes without a fight. 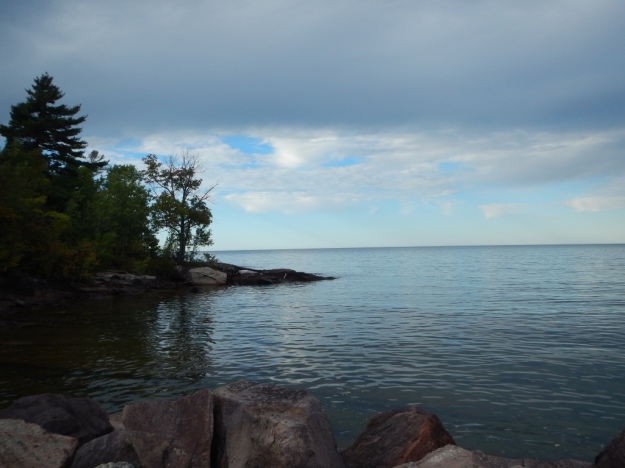 I march for the Grand Canyon, Zion, Glacier and all the rest of the federally protected lands.

butterfly with black-eyed and verbena bonariensis

I grow old. I do, in fact, sometimes wear the bottoms of my trousers rolled, but I will not stop now.

I have many more things to say. Maybe I will write about them another time or maybe not, but I will march and I will not stop.

So far this morning I have: skimmed the front section of the New York Times, worked on yesterday’s crossword puzzle, swept the floor (picking up stray oat shards that fell off the bran muffins), emptied the dishwasher, washed and dried clothes, plumped up the bath rugs in the dryer, tried to clean the cushions for the porch chairs, and corresponded with friends and relatives. All of this was not in an effort to be neat and efficient, but to pile up more tasks in order to avoid finishing this blog post. I began this post over three weeks ago, but I have not wanted to finish it. Part of this reluctance may be because, especially in this over-heated political climate, I want to avoid writing about political topics. As my friend Sharon said once, I do like to please people. I think, though, the bigger stumbling block is that I don’t know how to synthesize my ideas and feelings to express them succinctly in these few paragraphs. Synthesized or not, succinct or not, I am done waffling. Hold back the edges of your gowns, Ladies*, I’m going back in.

By the time I was 20 years old, I had pretty much given up the idea that politics could or would save the world. Earlier on, I had thought that non-violent political and social engagement could do that. That’s why I majored in political science. That’s why I had canvassed for Martin Luther King Jr. and had rallied against the war in Vietnam, had tried to organize to save Biafran babies, and had written about preventing the Alaskan pipeline. Well, the war in Vietnam did end eventually, but, in significant ways, the other causes haven’t worked out well.

I was 20 when the news of the Kent State massacre wafted into Zion Canyon where I was living. I felt pain and outrage for a bit and then the canyon and the sky took me back. 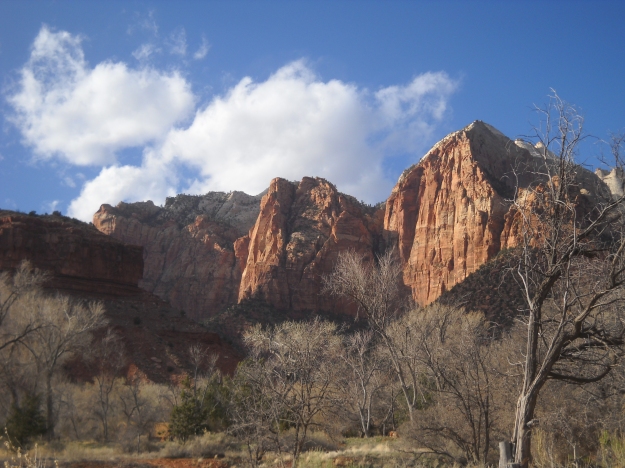 I spent three summers on the North Rim of the Grand Canyon. Back then we were mostly isolated from the news. Instead of the news, we listened to the wind in the ponderosas and the calls of the ravens. 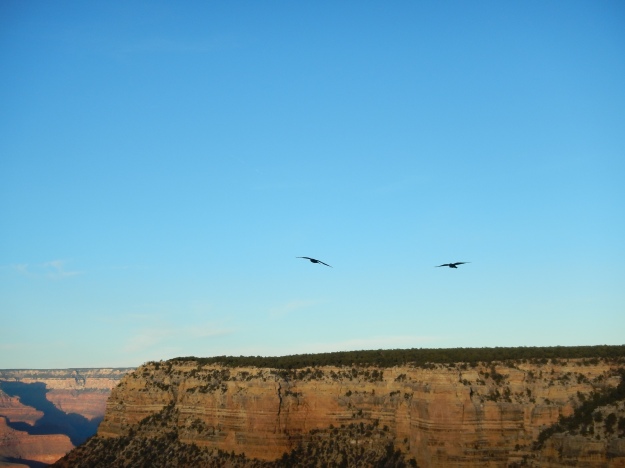 ravens over the Grand Canyon

When I was 22, I taught public school for one year in Page, Arizona, just outside the Navajo Nation. This was challenging for me because of loneliness, school bureaucracy, and fairly rampant ethnocentrism. This experience was also an honor for me because of the land outside my classroom, some caring colleagues, and the students themselves.

Those early years in wild country passed quickly and I settled in close to the ground with my husband, my children, and whatever little bit of land I had to garden. This is where I have mostly remained. However, sometimes I force myself to bring my head up. 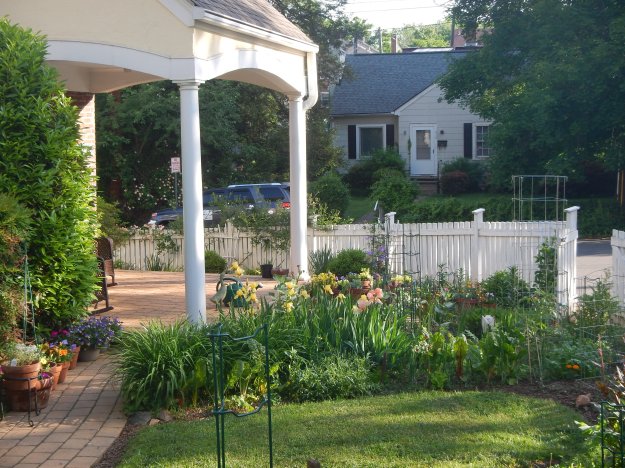 Bee’s knees: Already this spring, I have seen a few wasps, several bumblebees, several types of native bees, one cabbage butterfly, a couple of yellow swallowtails (or one twice) and another unidentified butterfly flying across the street. A few blocks away, I saw what looked to be a couple of honeybees among the flowers. I am hopeful that we legions of organic gardeners and farmers, and other assorted tree huggers will stem the tides of poison, disequilibrium, and destruction of our earth and its inhabitants. I plant my garden and I look (and find) signs of hope. Recently, I moved a clay pot that had over-wintered on my front porch and I startled a red-backed salamander. About a week ago, Tom discovered a garter (most likely) snake in one of my rock piles. Two evenings ago, I attended a presentation about non-honeybee pollinators at Ivy Creek Natural Area here in Charlottesville. It appears that many varieties of native bees and other arthropods are continuing to pollinate the flora for us, but we need to plant more native plants, and, of course, refrain from using poison.

Bear Ears: Ever since it came in the mail last Saturday (now almost a month ago), I’ve been wearing my “Protect Bears Ears” tee shirt to the gym and around the neighborhood.The few people that have commented on it seem to think this is an initiative to make sure that bears have adequate hearing protection.

No, it’s not about that. I have brought my head up from my comfortable dirt, rocks, and plants and I am becoming political again. Bears Ears is the name for an area of Southeastern Utah, east and south of Canyonlands National Park. Many Native Americans and environmental groups are calling on President Obama to name this area a national monument through the Antiquities Act. Some people  advocate leaving the control (and designation of use now and in the future) of this approximately 1.9 million acres of land to the state of Utah. Since I am adverse to, well, adversity, it’s a relief that people around here don’t seem to know what my shirt is referring to.  Confession: A couple of weeks ago realizing that many other gym goers’ tee shirts sport names of races, vacation spots, or bars, I chickened out and started wearing my wordless tee shirts again. This week, I toughened up and tried to put my body where my heart was.

My heart is with the native people of the Colorado Plateau—Diné, Hopi, Ute, Zuni and others. In many instances back in Page, my students, their families, and their cultures were not respected. It looks like there are still some people now who disrespect and disregard the cultures and histories of the groups who have lived in the Colorado Plateau hundreds (and thousands) of years before the pioneers settled there in the latter half of the 1800s.

My heart is with the rock, sand, and sky of Southern Utah. I believe that this land should be preserved for all the inhabitants of this earth. I hope that President Obama will designate the Bears Ears a national monument. 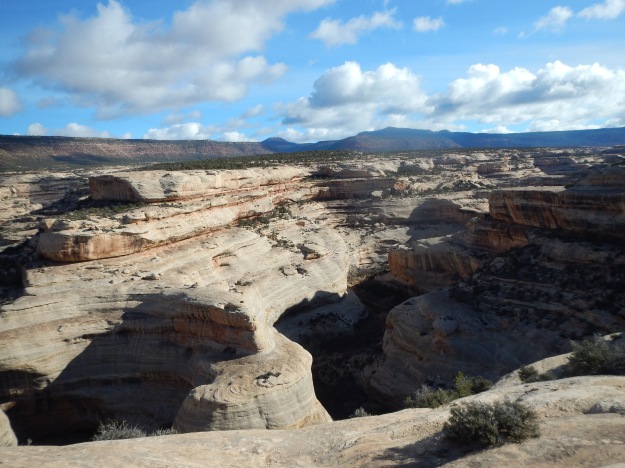 There. I have said my piece and I am hunkering down close to the ground again.

For more information about Bears Ears, please see: The Bears Ears Inter-Tribal Coalition, The Grand Canyon Trust, and many articles in the Salt Lake Tribune and other periodicals available online.

* Thank you, William Carlos Williams and Allen Ginsberg (see the introduction to Howl and Other Poems).